With Hollywood’s help, superheroes have become pop culture juggernauts. Their images are everywhere. The good versus evil theme notwithstanding, why are we so drawn to these characters? In my opinion, their allure is in large part due to their physical appearance. The bodies of superheroes are celestial, sculpted, and based on the ideal proportions. Their muscles and breasts are larger and more defined while their waist sizes are slender. Their jawlines are strong, and their cheekbones are high. The overall effect is a superhuman character that is both sexual and ethereal. But how is this supposed to make us feel? Although their bodies may be perceived as ‘ideal,’ in real life even with diet and exercise we couldn’t come close to these proportions. For a majority of us mere mortals, the powers of plastic surgery are our only hope for getting a superhero physique… and forget about trying to cultivate a superpower.

Superheroes are constantly evolving physically to be relevant to the times, and Wonder Woman is no exception. Fighting for justice, love, peace, and sexual equality, Wonder Woman is the most well-known female superhero and a true feminist icon. Although she was introduced in 1941, she is still relevant today, recently being ranked sixth in Comics Buyer’s Guide’s “100 Sexiest Women in Comics” list. Known as ‘Diana Prince,’ this curvaceous heroine had an era-appropriate hourglass shape for her debut in the 1940s. Over the years, her body has transformed to fit the times. Her arms, hips, and legs have become slimmer, and her breasts have become graciously larger. But just how did this transformation occur? Good genetics? A favorable artist? No, I think we need to ask the obvious question: did Wonder Woman actually have plastic surgery?

Just how did Wonder Woman achieve this transformation?

Like most celebrities, Wonder Woman has yet to confirm in her comic book world if she had plastic surgery. Although she has magical weaponry, such as the Lasso of Truth and indestructible bracelets, she clearly doesn’t possess the power to change her figure. So, per my professional opinion and for your entertainment, I have listed the procedures that Wonder Woman actually chose to bring her body into the new millennium:

Since her comic debut, Wonder Woman’s body has become thinner in all the right places. In my opinion, it appears she underwent SmartLipo of the arms, hips, thighs, and calves to get rid of those persistent areas of pesky fat. As SmartLipo removes fat with a laser and a small tube (just the width of a straw), Wonder Woman’s scars would be virtually invisible, like her plane. Furthermore, as this procedure is completed in the office, while you are awake, she clearly would have had time after the procedure to save the earth from imminent doom. Most importantly, even though SmartLipo has little associated discomfort and a short recovery time, Wonder Woman’s super strength and endurance would allow her to heal instantly.

Wonder Woman was either generously endowed by her gods or she clearly underwent a breast augmentation procedure. Although her original shape was not lacking, recent depictions of her breasts are exceptionally voluminous while still appearing natural. This suggests that her breast were augmented with a moderate sized anatomic shaped silicone breast implant placed underneath the muscle. Whether she chose to have her scar placed around the areola or at the base of the breast is a non factor as the scars are very small, subtle, and hidden by her fierce Wonder Woman top. Furthermore, as the surgery only takes 45 minutes and can be completed with IV sedation alone, she would miss no time battling evil with her fellow Justice League team members. Keeping the world free of danger is clearly most important, but achieving a beautiful breast shape is a close second.

Even though immortality is common among superheroes, Wonder Woman would not be equipped to fight the forces of nature. Eventually, even for a woman of her strength, time would cast its nasty spell. Therefore, I highly speculate that Wonder Woman’s youthful, wrinkle-free face was in part a result of a natural facelift, a cosmetic fractionated laser treatment, and fat transfer to parts of the face that needed a little more volume. Her results are natural and balanced, suggesting that a less invasive, short incision procedure was used. Besides Hermes’ gift of flight, the windblown appearance would not be a good look for a superhero. Fortunately, pulled and unnatural facelift results are now things of the past. Most importantly for Wonder Woman, the scars are hidden within the hairline, so neither the heinous villains she fights on a daily basis nor her fellow crime fighters would be able to tell that she had a facelift.

A Cultural Look at Wonder Woman 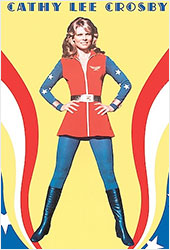 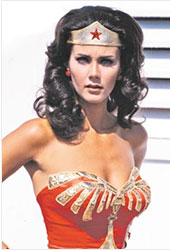 Carter is the iconic Wonder Woman and played her in two television series from 1975 to 1979 (The New Original Wonder Woman and The New Adventures of Wonder Woman). The combination of her beauty and strong yet compassionate performance captivated the hearts of viewers and helped her become the Wonder Woman so many women admire and so many men adore. 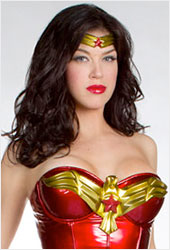 The unaired 2011 pilot for the new Wonder Woman television series was critiqued for David E. Kelley’s writing rather than Palicki’s acting. Called “one hell of an actress, capable of handling emotions big and small and demonstrating major screen presence” by prominent critic Alan Sepinwall, Palicki was ideal for the role, but Kelley’s characterization of Wonder Woman is said to lack dignity and charm. Perhaps someday Palicki will have the chance to show off her skills in this near impossible part to cast. 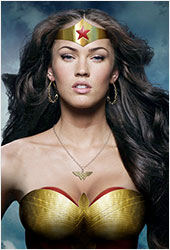 Rumors were floating around that Fox was the frontrunner to play the part of Wonder Woman in a new movie, but Fox smashed the gossip by calling Wonder Woman a lame superhero and stating that she doesn’t want to take on the role. Apparently Mrs. Fox, who has been considered a modern sex symbol, doesn’t feel she has the acting chops to take on this feminist role. And so the search for the next Wonder Woman continues…

The real question is whether Wonder Woman’s body is naturally obtainable. While many actresses have been considered for the part, it is not often that you come across a tall woman with a large bust, tiny waist, slender figure, and strong jawline. Wonder Woman’s six foot stature alone is almost beyond the bounds of possibility for most women. And if you were fortunate to find a woman that fit the height and slender requirements, the breast dimensions would invariably be too small, requiring a breast augmentation procedure. For women who have been naturally bestowed in their breast, there is often a similar abundance in the midsection or hips. Diet and exercise would be helpful for this type of woman but those stubborn areas of fat would probably require SmartLipo to achieve Wonder Woman’s lean form.

Even if a woman was able to achieve the physique of Wonder Woman without plastic surgery, facial enhancement procedures including a facelift, cosmetic laser, and fat transfer would be inevitable. If you consider that Wonder Woman was introduced in comics in the 1940s, to maintain the youthful appearance of your face these procedures would be necessary. When the time is right, the loose skin would have to be eliminated, the sagging face would have to be resuspended, and the contours of the jawline would have to be defined.

So is this really attainable? Clearly, as superheroes like Wonder Woman represent the ideal, it will never be truly attainable. But the take-home message from plastic surgery that is done correctly and expertly is that the ideal should be highlighted in each person without changing who they really are. Embrace the superhero body and strive for perfection but also cherish the imperfections. Even Wonder Woman, who is our best representation for female strength, resilience, and compassion needed a little help with those problem areas. So the next time you look in the mirror and don’t like what you see, take a step back, take a deep breath, and channel your inner Wonder Woman.